The “smugglers path” certainly gives the perfect adrenaline boost to complete an unforgettable holiday on the Garda Lake. It's an extraordinary ledge route carved out of the cliff-rock that plunges into the waters of Lake Garda, some 300m below. Not for the faint-hearted, this impressive horizontal Via Ferrata - semi equipped path provides hikers with a good amount of adrenaline and exposure as well as breath-taking cliff-hanger views of the lake, reaching as far as the southern shores.

The Smugglers Path stretches horizontally on the Western side of Lake Garda. Although it is partially equipped with bolts and cables, it also requires the use of additional equipment such as carabiners and rope, provided and handled by your qualified Mountain Guide. Good physical condition and lack of vertigo are two essential requirements to successfully overcome the most exposed tightrope sections, whilst your guide will ensure safety allowing you to maximize the enjoyment of todays’ hike. 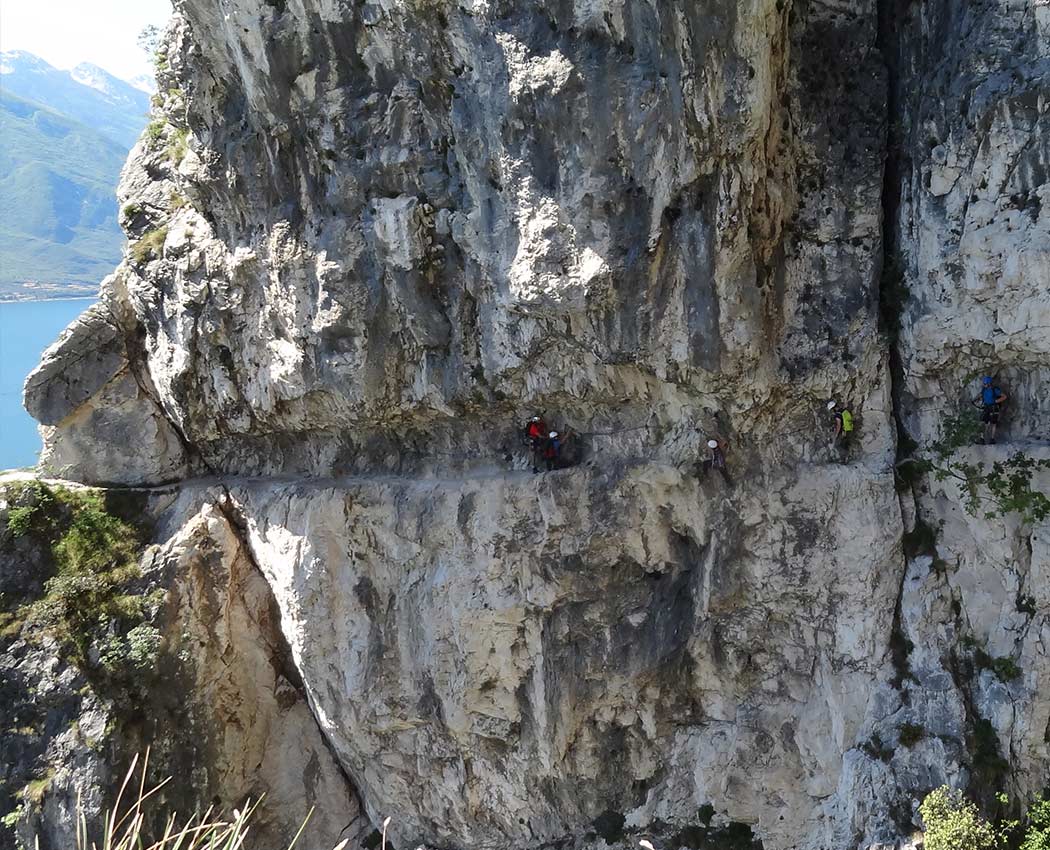 Originally used by smugglers to carry salt and tobacco un-noticed, during WW1 it marked the direct link between Italy and the Austro-Hungarian empire. After the war, the local municipality intended to enlarge the route as to create a road to link the town of Limone sul Garda with Val di Ledro, though the project was eventually dismissed for the difficulties encountered in its realization.

From the carpark located at the entrance of the small village of Pregasina, we begin our hike descending along the old Ponale tarmac road, now a pedestrian and cycle route. After a couple of hairpins the Smugglers Path begins, initially by going down a little into the valley, then reaching a metal containment nets for debris, which marks the start of the equipped path.
The Smugglers' path measures approximately 2 -3 km from start to end, it is equipped with sections of metal wire and 450 bolts fixed along the track. The route alternates easy sections yet exposed, not to be underestimated, with short horizontal passages, suggestive vertical ladders and traverses equipped with iron cable. A continuous series of bends offer hikers the chance to take breathtaking pictures of the Lake below and the Sarca valley in the distance.
Upon completion of the equipped path, we follow the gravel and rocky downhill path to the main road by the lake, or take the steep uphill path leading back to Pregasina.

Each Guide can take a maximum of 4 people.

Included in the fee: the Guide service, the rental of technical equipment necessary for the activity, and the transfer from Arco.

Not included in the fee: anything not mentioned in "included".

Prev
Next Via Ferrata Castel Drena